On 17th April 54 TTO freshmen went on their annual trip to Great Britain. After a grey, foggy arrival in Dover, the first stop was at street artist Banksy’s giant anti-Brexit mural. The rest of the afternoon was spent at Dover Castle where fortunately the sun appeared so we could really enjoy exploring the extensive grounds and admire the view. At about 7 pm we arrived at the meeting point in Westgat-on-sea where the students met with their host families.

First thing on our programma the next morning was the theatre workshop during which the students worked out and staged their interpretation of one of the Canterbury Tales ‘The knight’s tale’. After this creative beginning of the day we went Canterbury for some lunch and shopping time. Next on our programma was the guided tour around the famous cathedral where archbishop Thomas Becket was murdered. The historic river cruise was a wonderful, relaxing end of the day.

On Friday morning, after having said goodbye to the host families, we left for Margate for a lovely waking-up walk along the beach. Luckily the weather was great again so everybody really enjoyed spending some time on the beach. At 10 o’clock we were expected at the Turner contemporary museaum for a guided tour of ‘A place that exists only in moonlight’, an exposition by Katie Paterson. Although it was a rather technical exposition, it was really interesting to hear all about the ideas behind the art works. Last but definitely not least we strolled along the always impressive White Cliffs of Dover before returning to Weert. 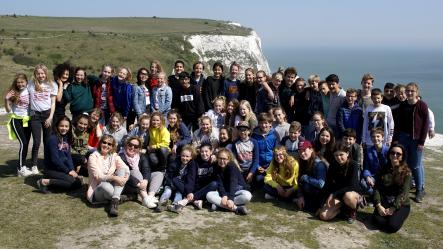